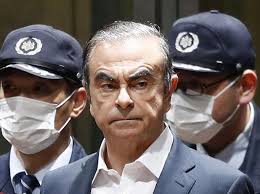 Carlos Ghosn who is the former chief of Nissan has gone on to slam the justice system of Japan in the first public appearance that he has had in a long time after he had fled the country in the month of December.

He appeared publicly for the first time at a news conference from Beirut in Lebanon where he holds a citizenship and spoke at length about how the justice system in Japan had done him wrong. He said categorically that he had not escaped justice but persecution and injustice. He called it political persecution. He also said that he felt that if he was going to stay in Japan for any longer, he would risk death and for him to survive he would have to flee Japan.

In his speech, he had described how he had been taken away brutally form the world he had known to be his own on the day he was arrested in Japan in the month of November in the year 2018.

Ghosn has said that he has not felt like he was free after the day he was arrested and felt that it was impossible to express how deprived he felt and how grateful he was to be united once again with his family and his loved ones.

The auto executive who was once a top professional had been arrested at the airport in Tokyo on the allegations of him under-reporting of the compensation and the misuse of company funds.

He said that these allegations were actually untrue and he must have not been arrested as per him. He has been saying that the charges against him were just baseless.