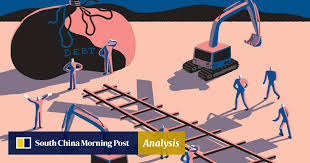 China Is Sitting On A Heap Of Enormous Debt Says Analyst

Independent analyst, Fraser Howie has told CNBC that the world’s second largest economy has reached such a situation where its hidden debt can no longer be ignored and the cost of servicing these debts is very distracting.

As per the Institute of International Finance’ s reports, total debt of China including household, corporate and government has increased over 300% of the GDP in 2019’s first quarter which is slightly more than what it was over the same period in the previous month. China has had a huge stimulus and turned the credit taps on and this drove their global demand. Howie said that they had to pay for it someday and are now suffering as a result. Some years back the Chinese banks had extended the record amounts of credits with a move to improve growth and thus China took deleveraging efforts which is the process undertaken to reduce debts and this led to China’s debts to increase rapidly.

The trade war has however shadowed the efforts made by China to bring back the pace of the slowing economy and it was its lowest growth since 27 years. The banks had increased their lending earlier in the year and this led to record high surge in new loans. A reform on interest rates has been launched by the People’s Bank of China this week which would result in cheaper borrowing costs for firms and thus in turn boost the investments.

Howie has told CNBC that the real issue now would be if there will be demand for more amount of credit. He said that economy of China is slowing down and has faced many headwinds. There have been companies which are leaving China. Thus China is turning into a place which is not so favorable for investments for a variety of reasons.