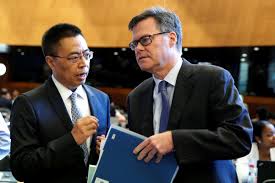 China to Think Again before Proceeding with Trade War against the U.S

Tariffs between China and the U.S. are already at their maximum.

China has imposed tariffs on U.S. products worth $135 billion. Imports of American products into China are at dismal levels now after the tariffs and will be of no use if China imposes further tariffs on the U.S.

In the U.S. the agriculture sector has been the worst hit. The American Farm Bureau Federation states that about 40 percent of the farmers’ income is coming only through government bailouts or insurance payouts as most of them have already gone bankrupt.

Now that American farm exports to China are not very substantial, China is unable to threaten the U.S. on the agricultural front.

The U.S. has been supportive of Hong Kong. If China unloads its reserve stockpile to retaliate against the U.S. on this account, it would face a deep crisis, without its reserve cushion. This may lead to a currency depreciation that would almost destroy its economy. China has to think again before going ahead with the trade war.

Another hold that China has is its rich rare earth asset. There is a chance that China may threaten its rare earth material exports to the U.S. However, the U.S. can easily find new supplies, just as Japan did in 2010 when China refused to supply rare-earth to Japan.

Exports now feel that China has no proper weapon to use against the U.S.

The trade war has impacted the Chinese economy more than it has done on the U.S., says Nomura Research Institute. The war that has raged for about a year and a half continues to evade a negotiation, partly because China is not coming to terms with the U.S.

While China is showing a slowdown, the U.S. economy has been quite resilient by coming up with good economic data showing a positive trend, says chief economist Richard Koo, from the Nomura Research Institute.