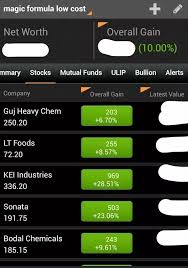 A strategist from Credit Suisse expressed confidence in the Indian Stock market and said that investors have a buying opportunity. Indian markets could give an ROI of 10% easily in the next six months. Indian benchmark indices have shed a lot since their earlier highs in June. The Nifty 50 lost 8.71% value compared to its June high. The S&P BSE Sensex closed on Wednesday at 7.44% decline for the June high.

Suresh Tantia, an investment strategist at Credit Suisse, commented that it might take some time for the Indian markets to recover to previous levels. He believes it is the right time to bet on the stocks, and anyone who has an investment horizon of six months or more could get a 10 % return on investment. He said that there’s no external risk for India, and a market correction of about 10% without external risk is an excellent buying opportunity.

India, which imports more than 80% of its oil requirements, is especially sensitive to movement in crude prices. With Brent Crude futures trading at $60 per barrel, he feels that oil is currently cheap. Expensive oil means a widening current account deficit for India. Commenting on the political scenario in India, he said that the country was free from political risk after Prime Minister Modi’s landslide victory in the 2019 Indian general elections.

To stimulate consumption, the central bank has cut interest rates with the hope of delivering a fiscal stimulus to the Indian economy. The Reserve Bank of India committed to pay a dividend of INR 1.76 trillion ($24.6 billion) to the central government. India’s central bank, RBI, follows a July to June cycle and pays annual dividends to the government. Tantia claimed that India was better insulated from the US-China trade war than other Asian nations, which he said, were very vulnerable to the ongoing trade dispute.