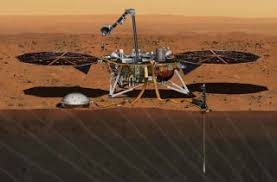 The self-hammering heat probe of NASA’s Insight lander which is stuck on Mars since Feb 28th this year may be able to extricate itself if a new plan of engineers works. The probe nicknamed “The Mole” had to burrow 16 feet into the ground but it stalled at 14 inches. As the territory is unknown to man and till date nothing has dug so deep into Martian soil so it is difficult to predict what the ground is made of. Both NASA and German Space Agency made the mole and the package (HP3 or Heat Flow and Physical Properties Package) have been working since June this year to move it deeper. The new idea is to push the probe against the wall hole that it created using another instrument. This could be done by Insight’s Scoop which is based on a robotic arm.

As the mole is slipping further into the hole in its attempt to dig deeper officials say that pushing the instrument against the wall may work. They feel that this movement may create sufficient friction to keep moving the mole forward when hammering resumes. The mole was created to measure heat flow from interior core of Mars which will answer theories about volcanic activity on it. This knowledge will also let geologists understand and compare similarities between Earth and Mars. The research is part of NASA’s ongoing research for search of life on Mars. The “Mole” is structured to dig on its own and should not be removed from the hold it begins to dig. A few months ground engineers tried to remove a support structure that keeps the mole place to examine the hole and area into which the mole is slipping. The team spent several months using the scoop to collapse the hole but as the arm is at an awkward angle the task is tedious.