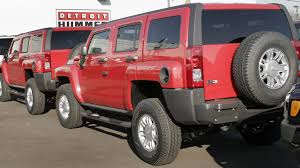 General Motors All Set To Relaunch The Hummer Brand

SUV version of it. As reported by the Wall Street Journal, the new Hummer model will be launched under the overall GMC brand and will be an electric-SUV instead of being the conventional gas ejecting truck. The official announcement is expected to be out during the Super Bowl with LeBron James starring in it. The all new electric Hummer is expected to be out in the market by 2022, as per the WSJ report.

Hummer trucks were way too popular but were also criticised for being a danger to the ecosystem. The criticisms were partly the reason behind GM’s discontinuation of the customer-favourite truck. The relaunched model is GM’s attempt to gift all the Hummer lovers their favourite truck back without any harm to the ecosystem. GM discontinued the Hummer brand back in 2010 when it filed for bankruptcy. General Motors have elected the Super Bowl to draw the curtains from the electric-Hummer officially, a platform which has become a battleground for automobile companies alike. Despite the hype around it, General Motors are not fully relaunching the brand and are only going to manufacture the SUV in small quantities.

Talking of new launches, Sony announced it will start testing self driving cars as it launched the Vision-S at it’s CES press conference on Monday. Vision-S is a prototype concept car designed by Sony with 33 embedded sensors. The Japanese tech giants have been hinting at a push in the automotive industry since quite a while now. The launch of Vision-S have only cemented the hints further.It is the first concept car from Sony but is only a fully-functional prototype with no plans of full production yet.