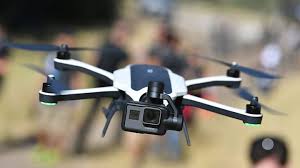 Karma the one and only drone of GoPro has been grounded due to some technical problems. GoPro the action camera firm has not yet confirmed the exact reason behind the grounding of the drone but it seems that there is some GPS related error. It is also preventing the drones from starting.

Manufacturing of the drones stopped in 2018 but GoPro kept its existing machines running by providing necessary software updates.

According to experts the cause of the glitch may be due to a rollover phenomenon in the GPS clock which happens in a regular interval time of 1024 weeks or every 19.7 years. The software has to be properly updated to minimize the error to zero otherwise it may the clock will stop working.

All the tech firms around the world have overcome this problem by updating their software for their machines but GoPro has not updated the software in Karma since September 2018.

The owners of the GoPro Karma started complaining about issues related to the starting of the drone since last week. Some say that when the GPS is calibrated within a few tenths of a second the error message is shown stating ‘calibration failed, try again’.

The drones were launched by GoPro in September 2016 and have the size of a backpack. It is mainly used in action films to capture photos and videos from customized angles making the film or video more realistic. Even some retailers had bought it at the time of launch for 720 GBP. However shortly after buying the drones’ users started complaining about losing power mid-flight.