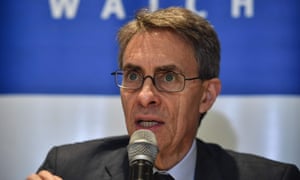 HRW or Human Rights Watch’s executive director had been denied an entry into the city of Hong Kong on the 12th of January, only a few days before there was a press conference planned for the releasing of report of human rights from the organization which is done annually.

Kenneth Roth had first sent a video out through Twitter at close to 8 p.m. when he said that he landed at the airport of Hong Kong for preparations that were related to the event which was slated to take place on 15th of January. But the authorities of immigration had blocked him and not allowed him to enter this region and that he said is something that illustrates the problem of the Chinese overreach which is currently worsening.

Roth has said that China isn’t just seeking to suppress their own citizen’s rights but also undermining the rights of those who are trying to hold China accountable for the standards of human rights.

With his decision of releasing this report in Hong Kong, he was hoping that the assault of Beijing all around the world will be getting the spotlight and is going to be a major subject in the annual report as per Roth. He further posted a photo on twitter which is apparently depicting the recent demonstrations in Hong Kong.

He said that in the past he has been able to reach the territory but, on this occasion, the government of China has decided that they were not going to let him enter.

He said that the authorities had cited immigration reasons for not letting him enter and gave no explanations about any other reasons.