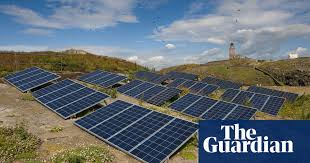 Renewable Power capacity will increase by another 50 percent by 2024, says the IEA.

The International Energy Agency has given a forecast on Monday that renewable energy capacity will increase steeply, which refers to the maximum amount that can be produced from the installations.

Currently, 26 percent of the world’s electricity is from renewable energy. This will touch levels of 30 percent by 2024, according to reports from the IEA.

Renewable power supply will be accelerated with a decrease in costs. Once government policies come into effect, cost prices will come down, says the report.

The IEA says that an increase in the solar photovoltaic market will rise, with installations increasing on commercial buildings, industry, and houses. Once businesses and factories find their solar energy costs declining, their need for solar power will also accelerate.

Executive Director Fatih Birol of IEA says that to get a cleaner environment like clean air and energy, we need to accelerate the role of renewable energy. Renewables are the second-largest source of electricity in the world, says Birol.

In 2018, energy demand was at its highest, says a research note from UBS analysts in July. The note says that the diversion from non-renewable resources will be time consuming and expensive, in the first phase.

Solar power costs are already seen to decline. It will further decline by another 15 to 35 percent by the end of 2024, says the report.