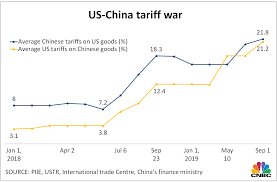 Imports and Exports higher for China with Untied States

The dollar-denominated Chinese exports as well as imports had been both higher in the month of December. There were reports which cited the data form the customs.

In the month of December, the exports which were dollar-denominated had seen a rise of 7.6% year on year against a drop of 1.3% in the month of November.

The imports of December were higher by 16.3 % one year ago as per the data which has come from the customs department in China.

The trade surplus in December had been $46.79 billion as against an expectation of $48 billion.

The trade data which was a lot better than the expectation shad been a reflection more of the price effects and base effects than that of the current strength as per a few economists in China as they referred to the higher prices of imports.

In the month of December, the trade surplus of China with the United States had been $23.18 billion which had been down from the level of $24.6 billion in the month of November.

The authorities have said that there is a positive sentiment when it comes to the trade between United States and China.