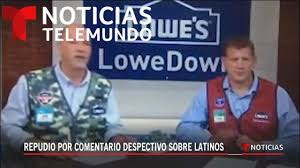 Joe McFarland Apologizes For His Comments Made On Hispanic Community

Last week, a top executive from Lowe’s had apologized after a comment which can be deemed derogatory for the Hispanic community. He had earlier said that the DeWalt power drill will be perfect for the Hispanic pros having smaller hands.

Joe McFarland who is the executive vice president of stores of Lowe’s said that besides the product being perfect for them, there is a lifetime warranty on the product. He said this in a corporate video which was broadcasted to the store employees on Monday.

His comments were criticized online after the employees had said that they were offensive, this prompted Joe McFarland to apologize.

He said in a statement issued by the company that he was sorry and his comments made during the associate broadcast were ignorant and careless.  He said that he takes full responsibility of the statements he made and that in the coming days he will be working with the associates, business leaders and customers to move on from this moment.

McFarland had joined Lowe’s from JCPenney where he was overseeing the company’s operation, stores and merchandising strategy. He has also worked at Home Depot earlier.

Lowe’s however has not confirmed whether there he would be bearing any consequences for the comments he has made.

Lowe’s has over 1700 stores in operation in the United States and has given employment to close to 300,000 employees out of which 190,000 were full time and 110,000 were part time workers in United States, Mexico and Canada. The company had said that will lay off many workers in a statement made earlier in the month. It also said that it will be cutting down on the maintenance jobs as well as the facility-service jobs.