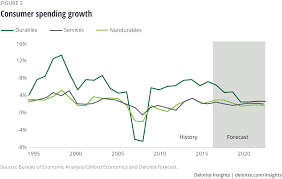 Spending on goods and services has seen a marginal increase by 0.2 percent in September from the previous month, reported the Commerce Department on Thursday.

As consumer spending accounts for almost 70 percent of the nation’s GDP, this is a closely watched data. The unemployment rate continues to remain low, while business investment has gone down.

Unemployment benefit applicants have gone up more than projected and consumer spending has shown marginal improvement. While the Labor Department had expected unemployment claims to be at 215,000, actual filings are at 218,000, slightly more than expected, according to data reported on Thursday.

President Trump who will soon face re-election in 2020 has to consider this data, as it will be a crucial prospect for his next election. He has been criticized for the trade tensions and slowing payrolls in the country.

When the central bank has brought a cut on interest rates for the third consecutive month, the Fed Chair Powell has said that consumer is driving growth in the economy. He states that thought initial unemployment claims have increased they are at low levels which are positive signs for the economy.

The General Motors strike by workers which took place in September continued for more than a month. It has brought down wages and salaries for September by $1.9 billion.

Business investment was slightly in the negative, as the trade war continues to hit business sentiment. Experts fear that this decline may spill to other sectors and consumer spending may take a beating if investment continues to falter.