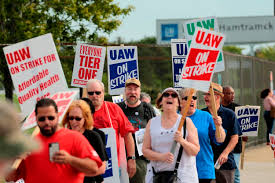 Tentative Deal Reached between the United Auto Workers and GM

The much-debated talks between General Motors and the United Auto Workers have come to an end through a tentative deal.

The 31-day strike has finally come to an end, though it has not come off with a conclusive and full agreement. However, the Lordstown Ohio plant will not be reopened, says General Motors.

About 48,000 United Auto Workers had participated in the strike against General Motors. A new labor contract has been reached between the two parties to end the month-long strike, on Wednesday, say reports.

The Lordstown Ohio plant was closed in November 2018. 4 other plants were also closed in the U.S. and Canada. The company went on an aggressive plant closure drive to cut down expenses worth $6 billion by 2020. Further, the company wanted to venture into sale of electric vehicles.

President Trump made the Ohio plant closure a national issue when he demanded CEO Mary Barra to open the Lordstown Ohio plant.

General Motors has agreed to wage increase of 3 to 4 percent or a lump-sum bonus payment annually after the talks between the two parties.

The vice president Terry Dittes of UAW who is also the director of the UAW General Motors department says that the top priority of the negotiation team was to secure a fair and strong contract for all its members.

The tentative agreement will be further reviewed on Thursday, after which the proposed deal will get confirmed. Only then, further details of the agreement will be provided, says a GM spokesperson. The deal will be approved only after it receives approval from its local union leaders.