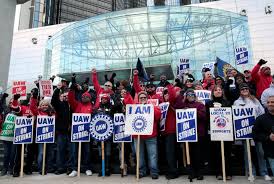 UAW members divided on the proposed agreement as voting begins

The UAW members had been aggressively coming in and going out on Sunday afternoon of the Local 668 as they had learned the details of the potential contract and they voted on whether the terms of the deal were acceptable to them.

Over 49,000 workers of General Motors had gone on strike about five weeks ago that had come to a head on 17th of October when the National Council of UAW GM had accepted a tentative agreement which was proposed during meeting which took place in Detroit.

Workers need to vote still and those employees are going to stay off their jobs and continue their strike till the deal has been ratified.

The contracts which had been proposed include an increase in wages, a faster path for permanent employment for their temporary workers and a signing bonus of $11,000.

The contract has met with mixed reactions from the employees.

A few of the employees have been happy with the health care benefits staying same in the contract but do believe that where the other issues were concerned the contract came up a little short considering the amount of work which the workers had done for the company, what they get back in return was less. Particularly in the division care they felt that more should have been done and felt that it was third-rate in comparison to what they previously had.

They were also hopeful that the agreement can potentially shorten the timeline for the temporary hiring in order to get the full-time status instead of the three to four year window which has been proposed due to which the employees are keen on continuing the strike.