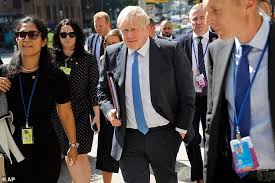 Looks like Prime minister Boris Johnson is in big trouble, as he is requested to reveal all the messages and emails that have been sent and received between him and US tech entrepreneur or face a sentence in prison. This is to ensure that he doesn’t have any unethical ties with him.

Boris has to submit all the information by Saturday to the London Assembly to explain his relationship to Jennifer Arcuri who is an entrepreneur. Her relationship with the UK’s PM is a subject of multiple inquiries.

The chairperson of London Assembly, Len Duvall sent a letter to Boris, asking him to submit all this information by September 24th, giving him 2 weeks to settle this or he would have to appear in front of the committee when summoned. The committee has clarified that they won’t distinguish between personal and private correspondence.

Boris Johnson could be a bit embarrassed as people have been speculating over his relationship with the businesswoman, to which he has always said no in the past. Anyhow, any such email would have already been deleted by now.

If he fails to comply with the requirements of the committee, he will have to face 3 month prison sentence or an unlimited amount of fine. This authority is given to the London assembly under the Section61 act known as the Greater London Authority Act 1999.

Boris Johnson is thought to be allegedly helping Jennifer Arcuri to obtain some high profile trade trips overseas and has also appeared in several tech events organized by her, which enhances her credibility and profile. However, Boris has declined any kind of impropriate connection.

Jennifer Arcuri has also declined any type of such relation with the PM and has said that any such news or allegations are baselessand if there was something, there would have been trails or tapes like to prove it.