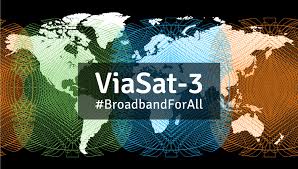 ViaSat Begins Developing ViaSat 4, A Series Of Next Gen Constellation

ViaSat, which is currently building 3 high capacity fully equipped broadband satellites, has begun working on another next-gen constellation, stated CEO Dankberg. ViaSat 4 was in development, which would leverage R&D on 1Tbps or more satellites of the ViaSat-3 series. ViaSat will launch its 1st ViaSat-satellite in 2021, over the American region. The next will launch 6 months later, which will cover Africa, Europe, and Middle Eastern region. The next will launch in 2022 and cover Asia-Pacific region.

ViaSat-3 will be followed by HNS’ Jupiter-3 along with ECK’s VHTS, which will have a capacity of 500 GBPS upon launch during 2021.More capacity can be expected from the ViaSat-4, stated Dankberg. He said that the next iteration would be a significant improvement. However, no specifics were released. It is currently considering factors like cost, performance, and schedule, expecting to release these details down this year. ViaSat has examined various low Earth broadband constellation filings and has been impressed by payload architecture plans of several proposed systems. However, ViaSat feels geosynchronous orbits are the best places for delivering satellite Internet.

LEO constellations require more satellites for providing global coverage whereas GEO constellations need only a single one. However, the latter have lower signal lags due to its proximity to Earth, which makes them suitable for online gaming and voice calls. ViaSat is currently evaluating merging geosynchronous satellites with terrestrial infrastructure that comes with lower latency or LEO satellites wherever available, for delivering a GEO-LEO hybrid service.

R&D for the ViaSat-4 is estimated to be over 5% of the company’s revenues. The last quarter saw ViaSat report $537M revenue, which was a 22% leap ahead. The customer base has grown as well, for in-flight Internet and residential broadband services. Currently, ViaSat-2, Wildblue-1 & ViaSat-1 are being operated by the firm. It is adding customers in Brazil in the aftermath of court approval for its services.

Over 15000 sites will be connected before this year ends. This quarter saw ViaSat report a loss of around $11.5M. The current backlogged business stands at $1.84B. Another $1B has not been included in this figure, which is contingent on several factors.