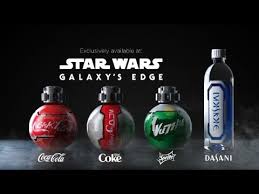 Transportation Security Administration has forbidden travelers from carrying the $5 plastic bottles of Coke, Sprite and Diet Coke that were designed as thermal detonators of the Star Wars Movie franchise as they look like explosives. These collectibles on sale at Galaxy’s Edge park of Disneyland in California is among 1000 unique products that were launched by the firm which were designed to fit within the world of Batuu. The $5 bottles of Coke became a rage among collectors as the name of each brand is written in fictional language Aurebesh of the movie series. People have already started decorating them on display shelves at home and also on Christmas trees.

When the order was posted on a Twitter account fans asked if removal of cap from the bottles and stowing them in check in baggage on flights would be acceptable but that too was unacceptable to TSA. A recent tweet clarified that as the item was a replica and will not be allowed to as even checked baggage. If discovered during screening in the luggage it will be treated as a thermal detonator. Disney has not responded to request for comments from the press as these items are likely to be on sale when it opens Star Wars themed Galaxy’s Edge Park in Orlando Florida next month.

The park has a planet of Batuu and travelers to that planet can board flights with lightsabers that have been built by hand along with astromech droids that can be purchased at Black Spire Outpost. To make up for the regulation, TSA has added a touch of humor to its “What Can I Bring guide” that says that though earth does not have technology to create an actual lightsaber, travelers can carry toy lightsaber in their luggage. Fans that want to take home these bottles have to find a post office between the park and airport to parcel them till rules change.